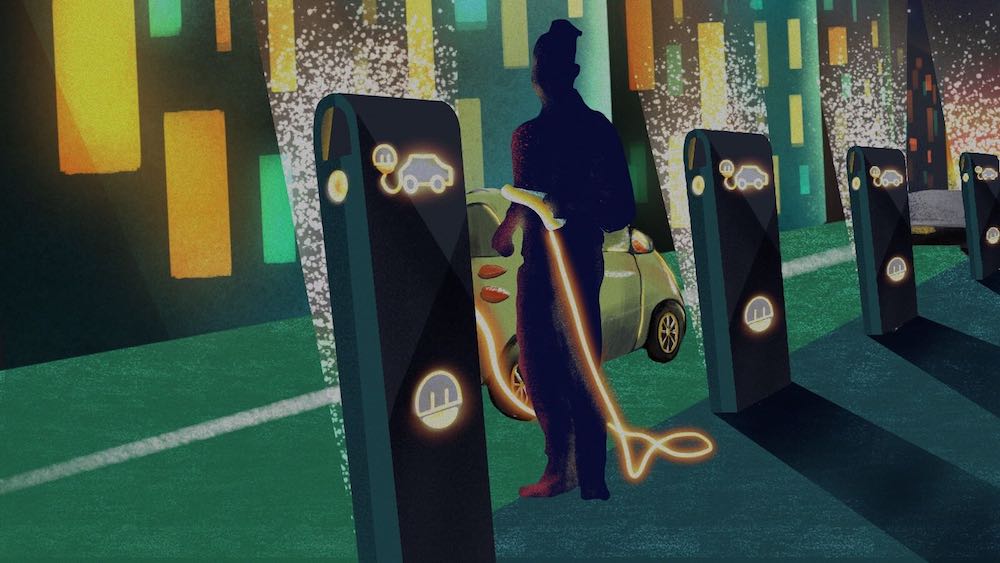 In the past few years the world of mobility has been living a continuous and exponential evolution. So many new things have entered our daily lives, from long-term renting for both private and commercial vehicles to Pay-per-Use, from electric cars to the re-discovery of electric bicycles and scooters.

Focussing on 4 wheels mobility, the interesting tendencies which are gaining important market shares are hybrid cars and electric cars.
The latter ones, in particular, are a more interesting option compared to diesel, petrol and GPL/methane cars as they do represent a sustainable choice for the environment and they are also efficient and not too expensive to maintain.

Their vast diffusion – the market shares are good and growing – marks the beginning of a positive transformation for the whole sector.
Although such growth is relevant, we cannot yet talk about a proper “electric revolution”, even though the Smart Mobility Report 2019 foresees a penetration of the market by 30% – a total of 7 million cars (hybrid and electric) on Italian roads alone.

If we analyse the report by UNRAE (the Italian National Union which represents foreign vehicles), we can see that this is only 0.5% of the total market – basically one car every 200. In Italy, in the first 11 months of 2019, 9722 cars have been registered for 26 models in total – a growth by 110% which has doubled since 2018.

Private cars are the majority of the registered vehicles (41%), followed by long term rental vehicles (30,7%), fleets (17.4%) and lastly dealers with 8.3%. Hybrid vehicles also saw an improvement in sales by 40% which happened in November alone, totalling a stunning 106% (from January until November) which translates into 106.412 vehicles.

Take a look at the numbers!

The younger sister: the Hybrid Car

Before starting to expand the context of electric vehicles it is interesting to talk a little bit about its younger sister, the hybrid car.
Hybrid vehicles have their traditional combustion engines supported by an electrical one which helps reducing consumption and pollution, especially along urban roads. The first hybrid car, The Toyota Prius, appeared for the first time in 1997 and today is still the most sold car in the hybrid market.

There are many different types of hybrid cars available on the market today and they are different from one another according to how much support the electrical engine gives. The first option is called Light Hybrid, then Full Hybrid and lastly, PHEV – plug-in hybrid electric vehicle.

This last model is the most modern version: their batteries can be charged whilst moving (travelling and stopping) and also when the car is not moving, by connecting its plug to normal electric plugs or to a charging unit.

Electric Car: what is it and what are the pros?

According to the way in which the vehicle is used we can see the car performing better or worse from an efficiency perspective.
An extremely favourable situation in the electric driving panorama, is driving through traffic. Such way of driving has a big number of long stops and recurring stop&go – especially in big cities with a lot of traffic.
In such context, consumption saving is fantastic since when the car comes to a halt, the battery starts recharging, gathering the necessary energy to continue moving with no issues and without using the fuel used by normal cars. Electric cars also do not release any toxic pollutants into the air such as nitrous oxides and particulate – even if they can still be created by brakes and the use of tyres (although in a smaller percentage). Acoustic pollution also sees a big reduction thanks to electric cars, especially whilst driving at low speed.

Having more electric vehicles in the urban context would translate into a better air quality even though this will not solve the big issue of pollution. The energy used by cars will continue to pollute depending on the way such energy is produced and especially if it comes from standard power stations.

Between the end of XVIII century and the beginning of XIX century, the electric propulsion was the preferred system to be used in vehicles since it guaranteed unrivalled comfort and reliability to the means of transportation which used internal combustion.

The first prototypes started to appear in the first half of XVIII century. It was only in 1888 that Andreas Flocken’s Flocken Elektrowagen was born, after the extraordinary experiment by the British Engineer Thomas Parker.

In a few years, the fast technological progress of petrol vehicles and the technical limits of batteries were bigger than the advantages and such issues sent electrical vehicles to a niche sector.
The peak of electric vehicles was at the end of XX century, with 30,000 vehicles sold on a global scale. Such number would decrease in the following years due to the competitiveness of petrol, diesel and gas/methane cars.

Many decades and many combustion vehicles later, electric cars are now back in fashion, especially because of environmental sustainability policies happening on a global scale. Such data have been confirmed during the last International Motor Show in Frankfurt where it became obvious that the future of cars will be highly influence by the electric industry.

A brand new EV (Electric Vehicles) Revolution still in its infancy – why?

The electric car is still a big new challenge for everyone. The main reasons why it is still not that widespread yet were analysed in some research studies which highlighted the principal reasons why people are not really buying electric vehicles. Such reasons were the same in both Italy and Europe alike. The biggest obstacle is the economic one (electric cars are still very expensive), followed  by the inadequacy of the electric network, the necessary times needed to fully charge the car and the limited autonomy in terms of mileage.

Let’s have a look at each single point in more details:

1- Expensive cost
Electric cars, compared to traditional vehicles, are definitely more expensive. Why? Because of lithium batteries. Its cost is now becoming more affordable – roughly $200 per kWh – but to have an autonomy of 250 real Kms you will need at least 40 kWh, for a total of $8000 (7.000€ more or less).  Such cost can be partially repaid because of some incentives and the fact that no car tax has to be paid.

2- The charging infrastructure needs to be improved and expanded
Charging points are not that widespread and that doesn’t help having many green cars circulating.
According to EAFO – European Alternative Fuels Observatory –  in Italy there are 3824 public charging points. 793 of these ones are fast charge (>22 kW) which means a national average of 12 points every 100 km. Definitely not as high as the European average which totals 32 charging points every 100 km.
The total number of the charging points, both public and private, is significantly increasing but such units are still distributed quite randomly and can be mainly found in big cities.
There are some European and national projects which are aiming to create a network of charging units along the main motorways but time is needed to implement them.
The number of charging stations available today is still enough to satisfy the current demand but a new system for the electric mobility will have to go through a complex implementation of the infrastructural recharging network.
There is an element that most people are unaware of: the main charging units used to recharge such cars are actually at home. Whoever buys an electric car today, they have a private parking space where a charging unit can be put. Unfortunately it is just a handful of people who can have such an interesting and helpful comfort at home.

3- Limited autonomy in terms of mileage with a full charge
Electric vehicles have a really good performance during the acceleration and they are quite similar to petrol cars. The difference is that the mileage autonomy is worse.
The current technology doesn’t allow rechargeable batteries to store energy in a sufficient way similar to traditional vehicles. Nowadays an electric car which has a reasonable price can do more than 300km with a charge. This is the reason why EV are quite helpful for both the urban mobility and daily trips up to 40/50 km (for example to go to work and back home).

4- Longer time to charge compared to the normal way of filling up on petrol
It is important to mention that the time to have a fully charged car depends on the capacity of the rechargeable battery and on the power of the charging unit. Usually, the amount of time needed at a fast charging unit is 2 hours – such unit has a power between 20 and 40 kW. Whilst using a wall-box in your garage the time goes up to 8/10 hours (7 – 11 kW) and it will be a total of 15 hours using the home charging kit for a 220 volts plug.
Even if they are not that widespread yet we need to also think about super fast charging units which allow to accumulate almost 80% of power in 30 minutes, more or less. Still, If we keep comparing this to the time needed to fill up on petrol or diesel, there is a massive difference.

How much do Pay-per-Use and LTR affect the spread of electric vehicles?

Quite differently from the data analysed so far, electric vehicles have registered a massive boom in the rental space. We are talking about a percentage close to 150% – the increase is dictated by 2000 new vehicles and up to 5000.
Such numbers are still quite low in Italy where there are only 13,000 electric vehicles circulating on the streets compared to the other 38 million which have a different type of fuel.

In Italy, two out of three electric vehicles are owned by companies or self-employed people in a long term rental agreement. This is an easy and cheap way to start “owning” an electric car.

There is something new coming up in the long term rental scenario, a system which will become very interesting to some specific categories of drivers. Such system is called “Electric Pay-per-Use” and it is mainly aimed for those people who only need to use a car in some specific periods of the year or for those ones who only drive less than 10,000 km each year in an urban context. With “Pay-per-Use” you only pay for what you use – the number of km you drive for – and the time for parking when the vehicle is not used, is not counted in the total.

We are just at the beginning of the EV revolution: electric vehicles allow to change the mobility making it more sustainable, with a zero CO2 emissions and less pollutants impact.

The diffusion of such green vehicles is spreading a lot and the winning side of the story can be seen in renting them, both from a long term perspective with a monthly rent and in the “Pay-per-Use” way

We just need to wait and see.