HR life: 3 ways of not allowing gender stereotypes in the business

I had just recently started my career in the HR world when my ex-boss, after a somehow quite difficult day with the rest of my colleagues told me: “I do work well with you. When we are at odds I feel as if I am talking to a man”. I didn’t really give too much importance to this sentence at the very beginning. I was actually so happy about this expression of trust that I didn’t pay attention to his words. I was thinking: “He has finally acknowledged my merit and my potential without any gender bias. I am on the right path”.

Too good to be true? QED Gareth Morgan

So, the years go by, many of them until I stumble across an amazing and provocative reading about nature and the way organisations work. The book is called Images of Organization by Gareth Morgan and it is a very interesting managerial text described by Yvonna Lincoln from Vanderbilt University as a text that opens new windows to look at the world.

The author opens one of such windows on the typical gender stereotypes which, even in the 21st century, is still influencing the organisational life and people’s behaviours.

I started reading these few lines and I’ve immediately thought about the compliment my ex-boss gave me almost 15 years ago. And I am no longer that happy.

Let’s go straight to the point

Here is an example by Morgan 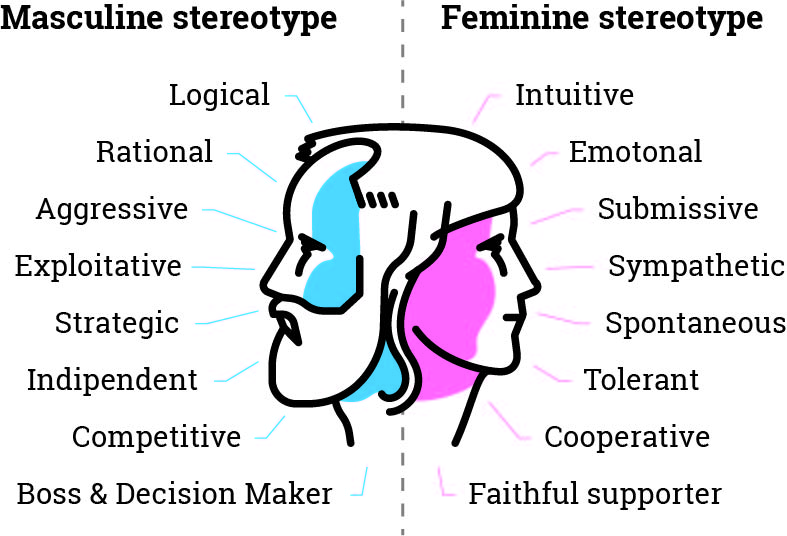 These stereotypes create distortions which will influence – or worse – condition our daily behaviours in the organisations.

What does it really mean to be influenced by stereotypes in the organization life?

It simply means that the values of most companies are the most common features of male stereotypes. The business is conceived as a rational, analytical, strategical, decision-oriented, hard and, sometimes aggressive entity. Exactly how men are supposed to be.

And what about those women who want to grow, become managers and reach the most important roles within the organisation? How many times did you actually hear a colleague of yours called a “careerist” only because she was working hard to let her fantastic qualities shine towards management?

And let’s not forget “radio boys”, the most efficient method to divulge subtle disapproval, sometimes quite cruelly.

Trying not to deep dive into the banality of clichés, the persistence of gender stereotypes within organisations makes everyone (and not just HRs) face different perceptions of the same organisational situation according to our sex. According to Morgan, this “creates a vast number of problems which make interactions among men and women very complicated”.

Ok, this was bad news… Good news is…

The “sexual balance” is rapidly changing in many organisations since governments of the most industrialised countries are actively taking into consideration equal opportunities.

From the economic, organisational, and enterprise level, the arrival of the Agile mindset as a culture and value-related system is bringing, also in the HR domain, a massive change.

Accept and overcome your fears

Everything and everyone get instantly busy within a firm. There are tasks, responsibilities, things to do, problems that need to be solved. The fight with time distracts us, all the things we have to do are a sweet anesthetic against apprehension but fear remains and it always demands an answer.

Some of us run away and some of us react with constructive acceptance. Accepting fear for what it really is, means to look at reality with no stereotypes, including gender bias. Overcoming internal resistances allows to change the meaning of the organisational life. Training is fundamental as the time we live in is constantly changing and we need to learn to live in it at our best.

HR Life: resistance to the changes
T-E-A-M: Together Everyone Achieves More
Agile Culture… what does it mean to be Agile?