THE 4 STAGES OF RESPECT. RESPECT FOR WHO? FOR WHAT? 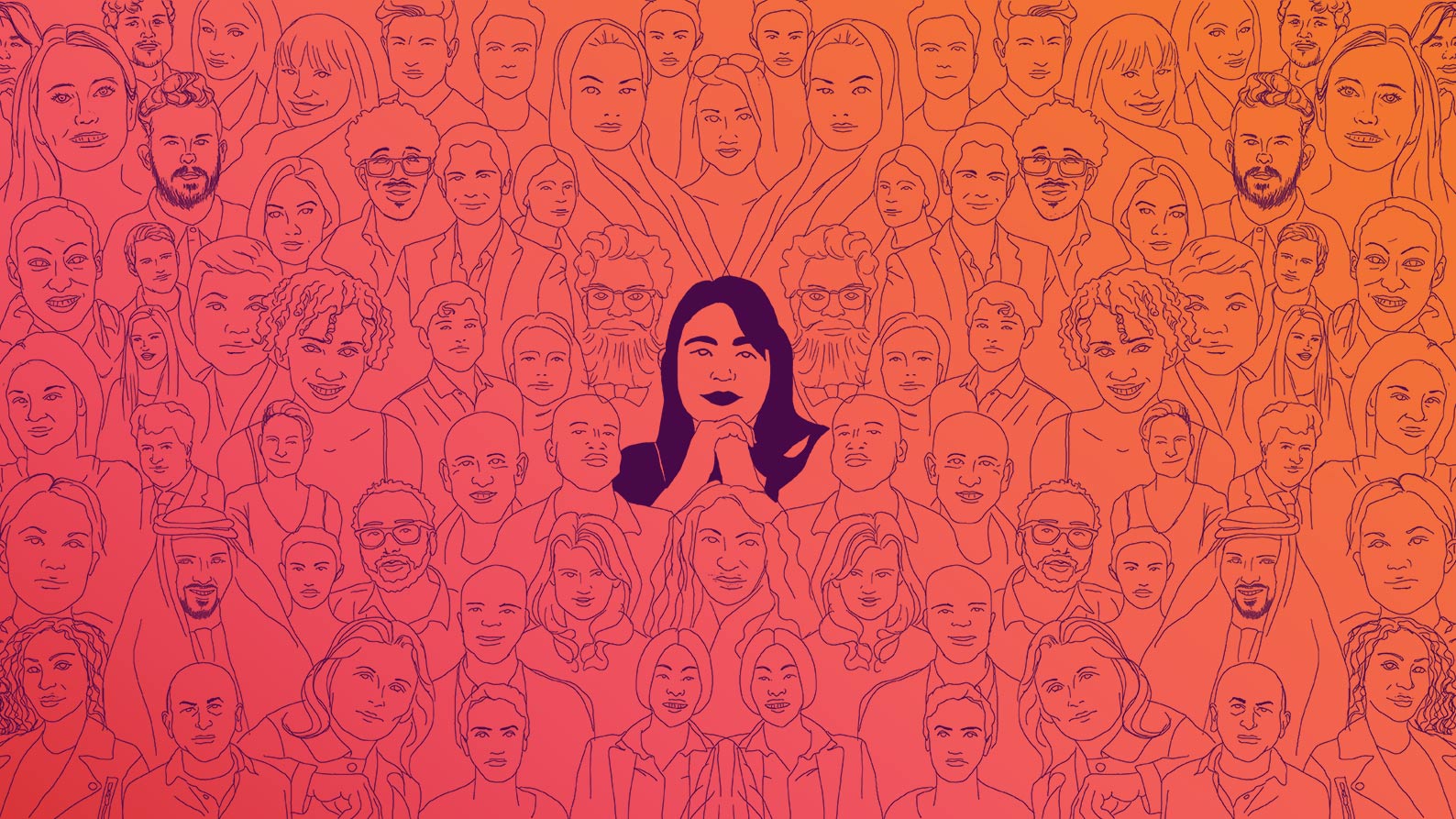 Writing an article about a company’s value is no easy matter, especially when speaking about respect. Therefore, I will turn to none other than the Italian dictionary Treccani, an eminent source that has provided us from generations with the nuances of meaning of words, with examples and literary references.

It is obvious that the interpretation of the word respect is not at all predictable, looking at the several meanings it can assume.

There are seven meanings in the dictionary, four of which are more frequently used.  Their examination will follow in a random order. A little like in the Italian radio program “6 degrees” on Rai Radio Tre, where the song playlist is based on subtle but solid connections, while appearing to be part of different universes.

Let’s start with the easiest and most understandable one, even in a business environment.

The more people live together daily under the same roof, the more important will be to establish some rules for a respectful coexistence, making sure they are observed.
An experiment was done by Interlogica, that was born spontaneously a while back between us, was the creation of working groups with the aim of improving some business processes and the topic of one of the teams was precisely respect, related to space and common good management.
“Respect for the commitments made”, with who? “Respect for a promise”, to who?
With one’s own team, which works better when all his components can trust one another.
With the company, with which we commit to giving our best with passion, competence, and creativity.
With the client, to whom we commit to respecting the timeline, the quality, and the agreed goals, with the awareness that respecting a promise also means defending one’s own corporate reputation and one’s own honor.

With this being said, we are led to the second meaning of the word or at least a nuance of it.
If the first meaning is easily understandable, with the second we start to enter into a system of values which is more complex.

2 – “IT’S A FEELING THAT ALLOWS YOU TO RECOGNIZE RIGHTS, DECORUM, AND DIGNITY…” 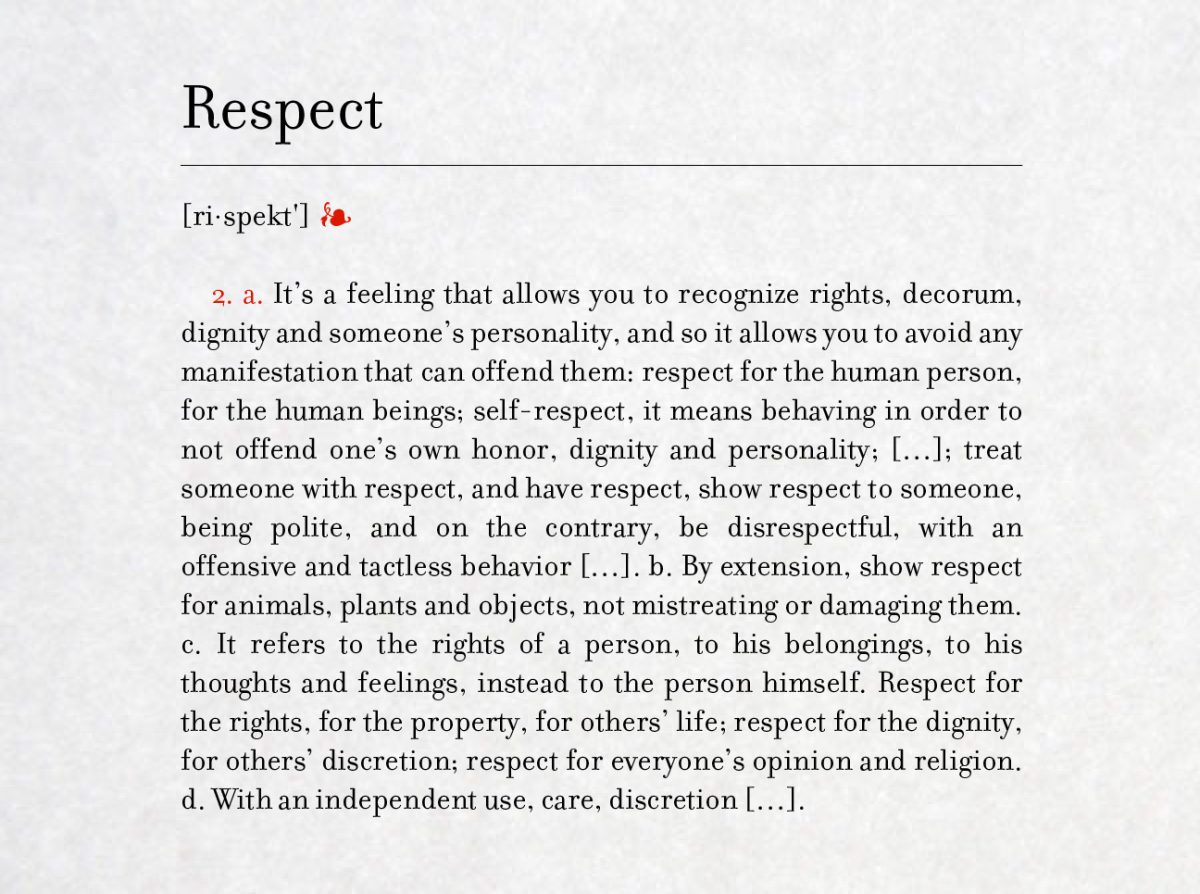 Everything is clear, isn’t it? Mmm… I suppose not!
To try giving an unambiguous application to this meaning of the word respect it’s like thinking about going in a dark forest without getting lost.
Every person perceives “rights, decorum, dignity, education, offensive and tactless behavior, thoughts, feelings, care and discretion” according to his own personal and subjective point of view.

It is a fact that every person is unique, and it’s something they have repeated to us millions of times. But, do we fully understand it? And how much do we actually take this into account when relating to other people?
If we provide an input to a machine, we know exactly what the output that we’ll receive will be – or at least this is what us programmers hope

– but, if the same input is provided to a person, it will follow a complicated path: it will go through the problems he’s facing at that moment, the film he has watched the night before, the beliefs and notions he has learned in school, in the family and from his friends from a very young age; it will go through old memories, his innermost feelings, traumas, and experiences; and it will eventually be completely transformed. 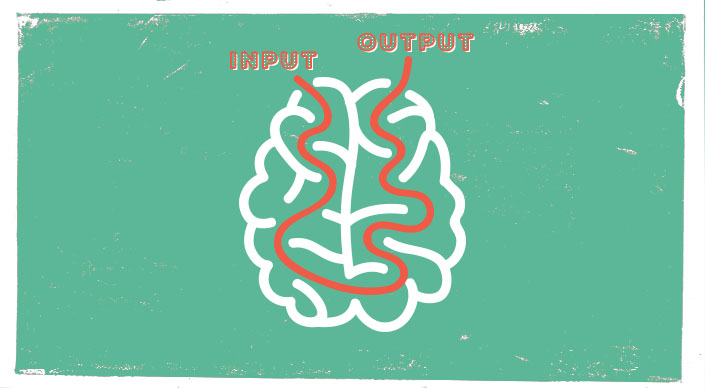 The more complex the input the longer and more devious the path in the labyrinth of the mind, heart, and body of the person who is elaborating it.

How can this problem be solved? How can we make sure that in a company every employee will respect the others and at the same time will feel respected?
A good starting point could be to always clarify the meaning of our actions and of what we have said; to always clarify every detail and force yourself to consider every possible aspect, even if it means to appear as a know-it-all – as one of our colleagues Cesare Cesari once said: “truth must be earned”; and we can say the same about respect.

3 -“TO TREAT OTHERS WITH CONSIDERATION, ESTEEM AND OBEISANCE: RESPECT FOR PARENTS, SUPERIORS…” 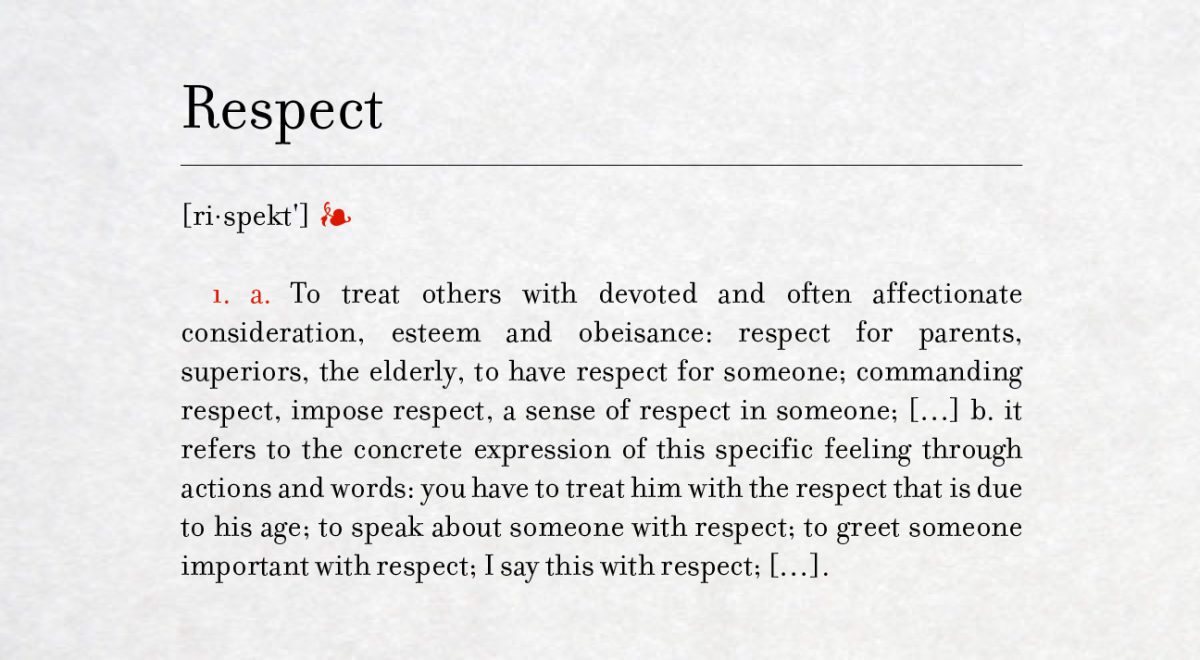 When there is a superior, there is inevitably a hierarchy. However, in our company, there are no hierarchies, or at least not in the traditional meaning. How does it work then?
First of all, we can try giving them another name; we can call them a system of responsibilities, the authority given by expertise, competence, and charisma. A system that regulates business relations, where everyone’s role is given by their worth and by their capacity to bring value to the company, more than by a prearranged position.
To put it simply, respect – for a superior – in Interlogica must be earned. It’s not an easy task and you must work on it daily, cultivating your personal value before your professional value, and, above all, making sure you respect others.
It’s a challenge that even the founding partners have accepted and confronted, with all the difficulties that it requires. Let’s imagine you have to conduct an orchestra with musicians that have the freedom to play according to their own inclination and personality – Riccardo Muti himself would have some concerns, but he can help us with it. “An orchestra is composed of one hundred people, two hundred including the chorus: it’s a community. We have included in it several different emotional responses, so the conductor must have the ability to create a shared sensitivity.” (cit.)

But what does it mean to create a “shared sensitivity” in a company?
To pursue a common good.
When we realize that everything we are asked to do is for a common good, and not for someone’s own interest, it becomes easier to obey the rules; even if we disagree with these rules.
With these “words of wisdom”, we arrive at the last of the four meanings of the word respect that we are analyzing.

4 – “ATTENTION, TIMOROUS CARE AND EXCESSIVE CONSIDERATION TO OTHERS’ OPINIONS, POINTS OF VIEW AND VARIETY OF CASES” 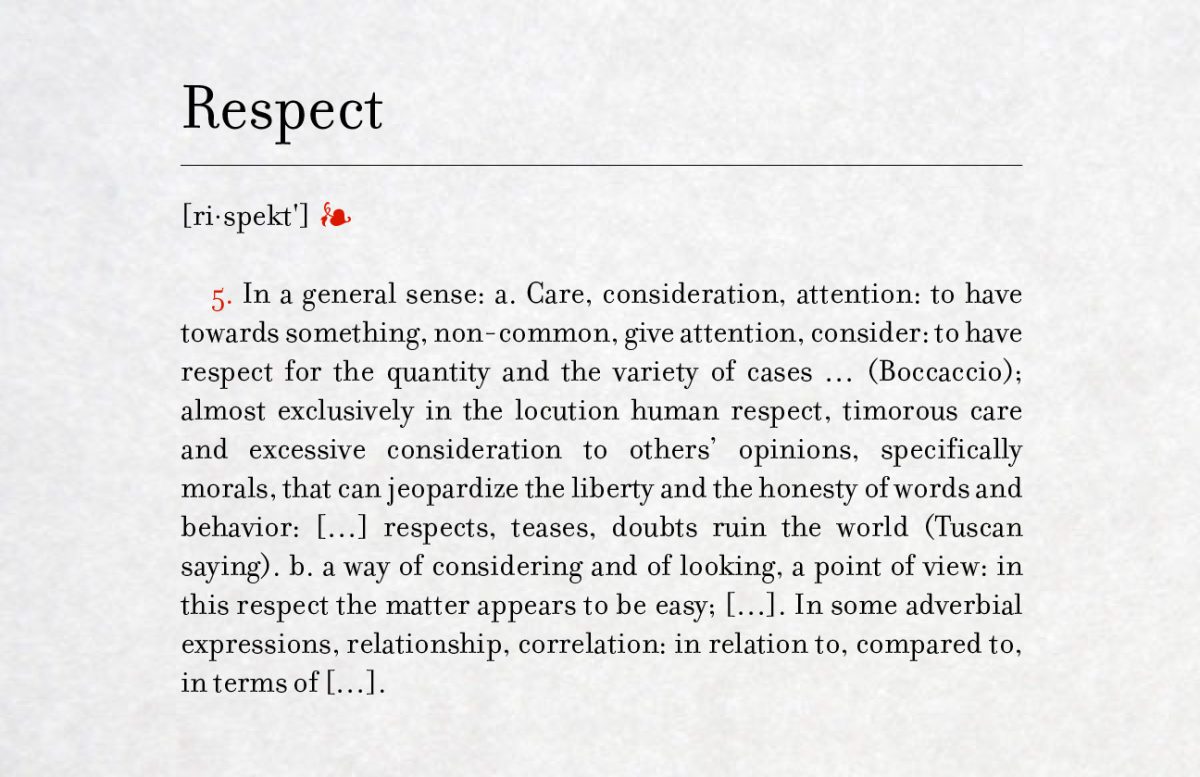 With the fourth and last meaning we reconnect to the beginning of the article, but with a different nuance, a threat to respect and the ways used to guarantee it.

It is difficult if not an impossible task to consider reality in relation to the infinite points of view from where you look at it, and at the same time to guarantee their respect. To do so it would mean to enclose our horizons in a minuscule space where respect is guaranteed, but at what cost? Space where the “infinite points of view” cannot enter because of how tiny it is. A tiny space full of respect and nothing else.

How can you guarantee everyone’s respect without limiting freedom of thought and expression?
You can’t!
Sooner or later every member of a group must accept compromises.
Where does my self-respect, the respect for my needs, end and where does respect others begin? It is a fine line that must be continuously revisited.

The great bet for Interlogica – don’t worry, we haven’t become a society of broker

– is finding the right compromise: to create a working environment that develops talents and creativity, where individuals are encouraged to think and act outside of the box; at the same time, we guarantee the observance of the basic rules and of the guiding principles that make everyone’s dignity and job feel respected.

Concepts such as “in relation to”, “in terms of”, “way of considering”, “points of view” all highlight the same thing: respect is always a different “object” that we have to confront ourselves with.
Whether it’s a contract that we must respect, or an authority, or a working space, or a person we are talking to; we always deal with diversity, and diversity will inevitably cause conflicts. A conflict between who we are, what we want, what we think and what is different from us, that forces us to readjust what we believe is a given fact.

To guarantee respect doesn’t mean to eliminate conflicts – that we understand are a monotonous and faded music – but to provide the ability to face them and manage them!
What are our tools?
An Ethical Code – inspired by the Italian Constitution – that outlines the guiding principles that must be respected; a Communication Channel permanently open – the People Team – that let’s the two parts converse, receives the points of view and tries to find shared solutions; and, last but not least, People – every person, without distinction of role or responsibility – that question themselves and try to find the right compromises for a common good.